Wow this has been a helluva a week for superhero related film news. So many movie still revealing costumes and characters, its almost as if the studios were competing in a game of one up manship.

Batman: The Dark Knight Rises – Anne Hathaway will be Catwoman 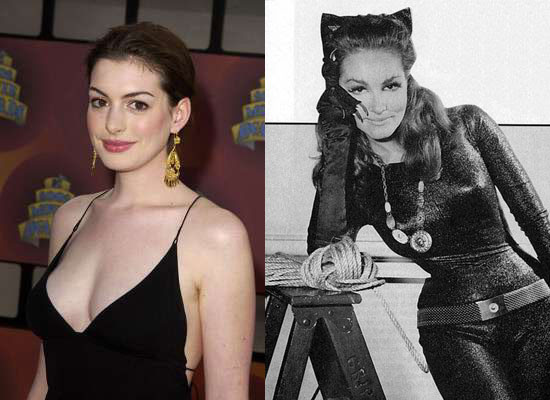 Now and Then - Catwoman
First up though the big news doesn’t involve a photo or teaser, its a cast announcement for my favorite superhero franchise currently running, Christopher Nolan’s Batman. For the third film in the Batman saga, The Dark Knight Rises, its been announced that Anne Hathaway will be taking on the role of Selina Kyle aka The Catwoman. Anne Hathaway wouldn’t have been my first choice, or even my choice at all. But I’m a not a casting director, and honestly as spectacular as the last two Dark Knight movies were I have complete confidence in anything Nolan does with these films. He has created the definitive Batman for the silver screen. Really Hathaway doesn’t big shoes to fill in this role, for me Julie Newmar was the best and only Catwoman in my heart. Eartha Kitt was alright, Michelle Pfeiffer’s character was definitely interesting but it wasn’t close to being true to the source material, and the less said about Halley Berry’s version of the character the better. So I raise a bottle of Strongbow to you Anne Hathaway you have a great opportunity here. 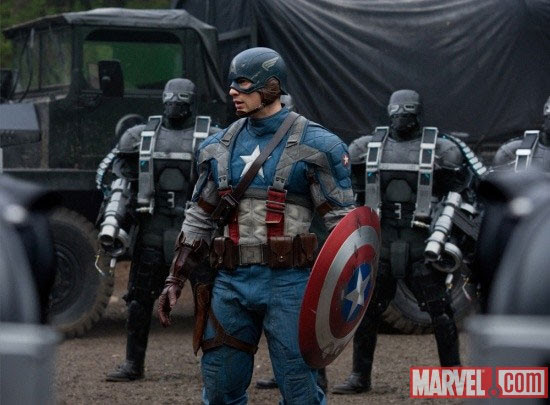 Alright here we go! I’ve have been waiting since I was a little kid for a Captain America movie. Yes I know there are a couple attempts floating around out there, but they don’t count. Basically because they sucked, HARD. Like a black hole that thrived on hopes and dreams instead of cosmic bodies floating through space. I never understood why a decent film about this character was so damn difficult. Already this movie has a leg up on those of the past in that it actually LOOKS GOOD. I don’t cringe while looking at this costume in the stills released by Marvel this week of the Captain America coming to the big screen. The design is kind of a hybrid of the original and the Ultimate version of the uniform, and it works great. Even though he’s dressed up in red, white and blue togs, this dude looks like a super SOLDIER. With every tidbit I see, I have more and more hope for this movie. 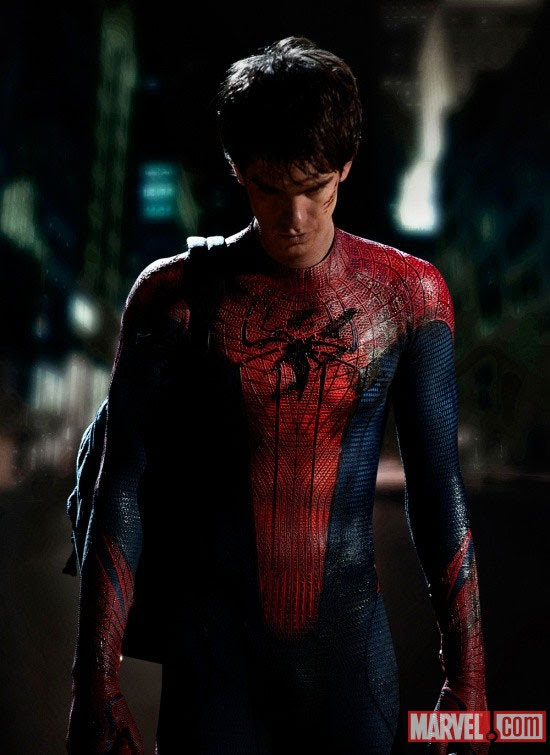 Here we have another reveal from the House of Ideas. Marvel shows us the new heir to the webline, Andrew Garfield wearing the Spider-man costume, sans mask. He looks like just got out of a rough fight judging from the gash on his face. Since its my damn blog you have to suffer through my opinions on this. I’m not at all excited about this reboot of the Spider-man movie franchise. I enjoyed the Sam Raimi version of this character played by Tobey Maguire. Okay I wasn’t a huge fan of that third one, but the first two were solid.

I don’t know what to make of this photo. First off I don’t know this Garfield kid, I haven’t seen any of his films. I’m not saying he sucks, I’m just saying I don’t know him or the strength of his acting. His filmography looks impressive so I’m guessing he’s got what it takes. The costume on the other hand, its tough to make a judgement call from this photo. Its so damn dark. It looks a lot more stylized than the previous big screen version. I need to see the mask too. Tough call on this one, but it doesn’t look horrible.

There were a lot of other reveals this week. I’ll hopefully stay awake long enough tomorrow to bring more of them out on the blog here. Until then, stay classy Interweb.